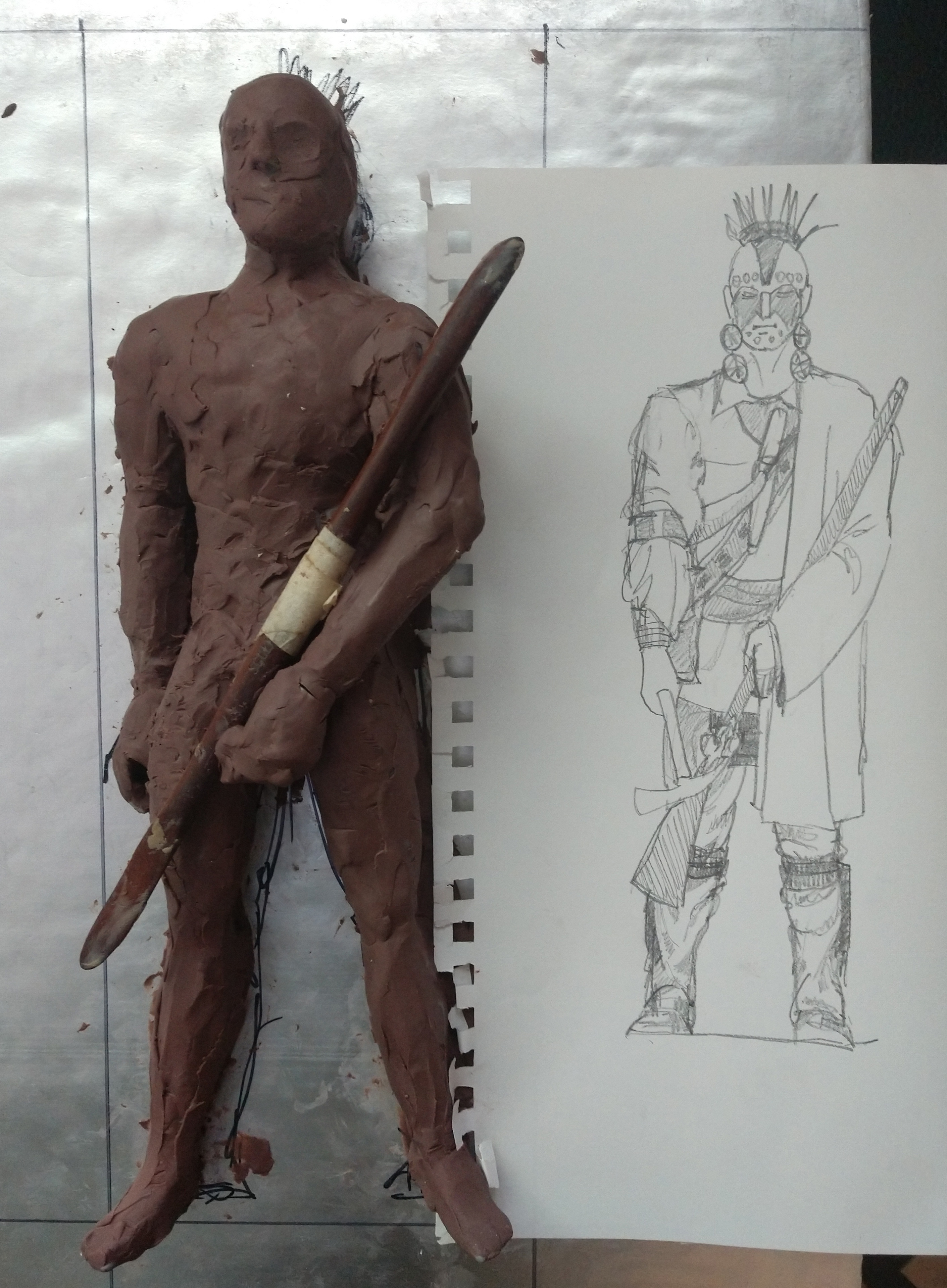 Starting with a sketch and building the base of the figure. Again I build the body and then dress it. That way it looks correct.

The Woman has Arrived 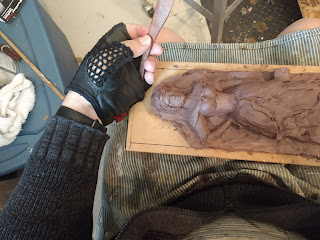 Working on the Woman today, outside temp is 100 degrees but inside my studio with AC and fans on to keep the clay cool, I am wearing a sweater and gloves to keep warm. Crazy right?

I have completed the basic model and I will let her sit for a while and live with it. Make a change here and there over time until she is what she wants to be.

Then ready to cast into maquette sculptures to add to the first three Soldiers.

Time to move on to the next sculpture,I think I will work on the Oneida Warrior next.
Posted by MT at 1:47 PM No comments:

And So I Have Begun 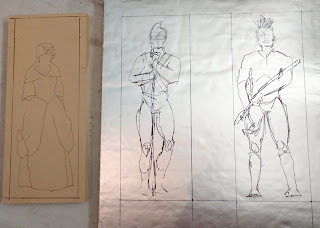 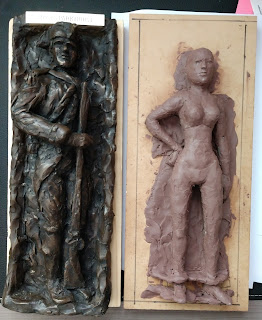 After a lot of research and many drawings, I have decided on the poses of the three new sculptures...more or less.

In the first photo on the left I have drawn the outline of the new figures on the base boards. From here I will start to build the figures in clay.

In the second photo, I have started on the "Patriot Woman" figure. Up next to one of the Soldiers, I have tried to keep her smaller in proportion. She will stand about 5'3" in the full size version.

If you look at the drawing on the back board above, you should notice that as I was working on her in clay she developed an "attitude". Look familiar? That is the confidence and strength look coming through. A no-nonsense "I can get it done" attitude.

Go with it. She will tell me how she wants to be seen.

Even though the figure will be covered with a huge full dress and apron, the figure underneath has to be done correctly and fully so that she wears the clothes convincingly. And yes, underneath all of that clay is her heart.


One of the nice things about being the designer of the Oregon Revolutionary War Memorial is that I can make changes. With the tenor of America today, it has made me think about other groups that helped in the Revolution and have taken a back seat in the history of the War.

I have completed the maquettes of the three soldiers depicted on the Memorial, the Continental, the Militia and the Minuteman, and I am working on the first of the three full sized sculptures. Over the last several 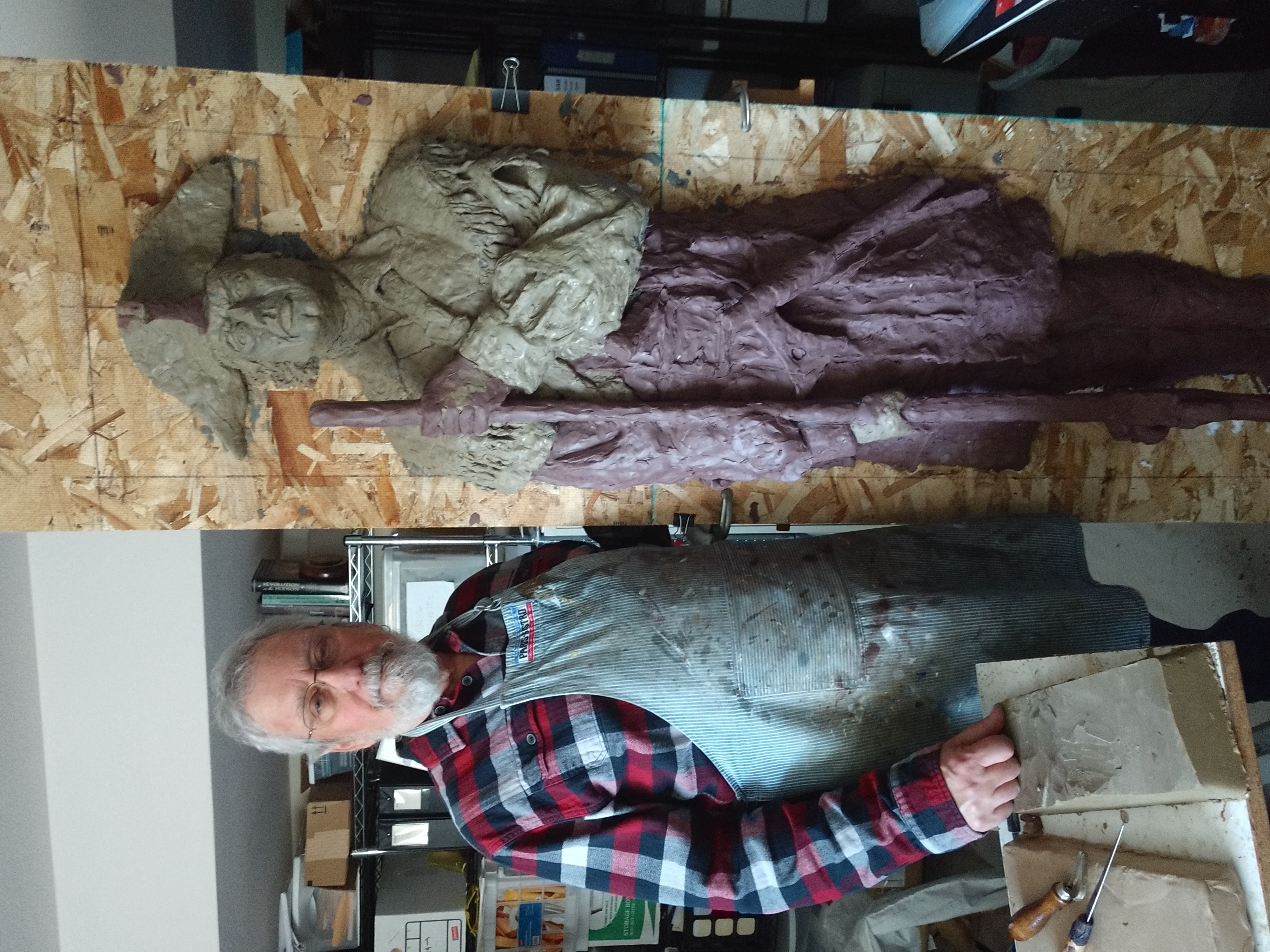 years my DAR friends have asked if I would add a woman sculpture to the Memorial, and I have agreed but it was not part of the original cost of the Memorial so I suggested they could raise some funds for the sculpture and I would donate my time. I even have made drawings but have set it aside. My bad.

The plus to setting it aside is that it has gelled in my mind and I have made many changes to the original sketches. She has grown in stature and importance for her contribution to the War.

So has the importance of two other groups. The Black soldiers and the Native American Nations, both almost lost in history.

The Memorial is a living, breathing ever changing interactive educational tool. Used to tell the story of the American Revolution, not just a list of names Honoring those who fought and died for Freedom. It is a Memorial to ALL who helped win the fight for Freedom.

I have decided that I will sculpt three additional life-sized sculptures of those three lost groups of Patriots.

The Woman to honor the ladies who were left at home to keep the family, farms, businesses and towns going during the War. Yes, they even had to take up arms for protection.

The Black freemen and slaves who fought for their freedom as well as the country.

The Native American nations who fought to keep their lands and help build a new country for all.

To represent the Black soldier’s contributions, I will make the Memorial figure represent a soldier of the 1st Rhode Island Regiment, the first Black military regiment. Many more than these 225 men fought on the Patriot side, about 5,000-9,000, but this regiment will be a great group to honor all Black Patriots.

To represent the Native American warriors, I have chosen the Oneida Nation. The Oneida Indian Nation became the first ally to America when they joined the colonists in their fight for independence during the American Revolutionary War at Lexington, Concord, Bunker Hill and their diplomats attended the June 11, 1776 Continental Congress in Philadelphia.

I am adding links to a 1st RI regiment www.blackpast.org/african-american-history/first-rhode-island-regiment/ and the Oneida Nation website www.oneidaindiannation.com so you can become familiar with who these Patriots were.

Research is the key to accuracy, and I have started that research. This will take some time and many drawings to get the proper figures. When I start a sculpture, my drawings always begin with the faces, that sets the right attitude I am looking for and that attitude sets the pose. The heart is the first thing I sculpt and then build the clay figure around it. Even though it is hidden, it gives the sculpture it’s soul. Attitude and soul make a sculpture “alive”.

Stay tuned to the ORWM blog as I will update it with the results of my research, sketches and final clay sculptures.

Other links for your enjoyment: Oregon Revolutionary War Memorial web site and blog, Artist Michael Tieman’s web site and his Blog.
Posted by MT at 1:54 PM No comments: