The ORWM is missing its true purpose, its true reason to exist.

I am uneasy, unsettled, there is a feeling of something haunting me, pulling at me. In the back of my mind something is not right. No, something is missing. I have started to sculpt the Patriot Woman for the ORWM, but it doesn’t feel right.

Something important is missing.

Then it hits me. Like the proverbial ton of bricks. That aha moment. 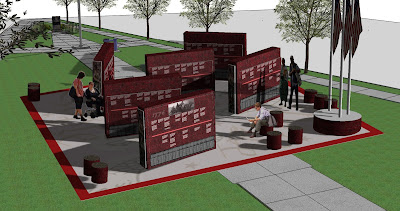 The Memorial is not complete.

The Memorial is missing its true purpose, its true reason to exist. It talks a good talk, but it falls short on delivering its promise. And now I know what it has been missing from the very start.

From its first inception I have spent many hours walking through the Memorial in my mind. As I walked, I added walls, deleted them, moved them around to form a path to follow. I could see the story begin to evolve. From the very first rallying cry of the Join or Die symbol on the floor, I walk over the stars placed in the concrete and around the thirteen benches. I see the changes of thirteen separate colonies becoming states and uniting into one country.

I touch the cool red stone walls and feel and see the timeline of this young experiment, this young democracy this young Republic. I read the words engraved in the stone about the struggles of the people as England tries everything they can to tax them and punish them for their upstart ways. I see how the people rise up time after time, year after year fighting for their right to Freedom. I can see the blood, hear the noises of the battles and feel the resolve as I look into the eyes of the life size bronze sculptures.

The names inscribed along the bottom of the walls are more than just names, just Patriots, they are our fourth, fifth, sixth and seventh great grandparents, our people, our family. Because of them and what they endured we exist, and this country exists.

I reach the end of my journey, the raised dais and see and hear the flags waving in the breeze, my eyes fall to the last words inscribed on the wall.
E Pluribus Unum.  Out of many, one.

In my walk through the Memorial I have traveled through time and have witnessed the birth of our Nation. But I am not satisfied. Half filled, or half empty depending on how you look at it.

The Memorial is alive but it is missing its heart, its soul, its humanity, its HOPE for the future. I can read it, but I cannot feel it.

It is the sculptures. The hope is missing there.

The Woman Patriot is not right. Like the other sculptures she is alone on the end of a wall. The bronze plaque tells her story, the story of the struggle of those who stood up for what they believed in. But it lacks the “WHY”. The hope for a better life, for a better future for those to come.

So today, after four years since I first put pencil to paper in the design of this ORWM, it will be complete. The family, the child, the future, the promise of hope. The reason for all of this. 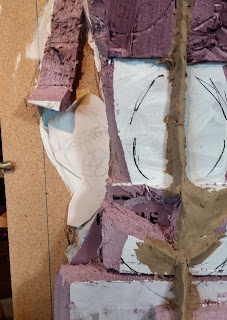 The problem of course is I need the image to stop people and have them wonder why she is on the Memorial. To be curious long enough to stop and read the plaque that talks about her contributions and importance in the Revolution. The single figure does that.

If I add a child, say a babe in her arms, will people walk past her because she now is the stereotype woman of the period, dutiful wife staying at home having kids. No interest there.

How about keeping the same stance, but adding a toddler at her feet? Better, but no. An older child maybe age 5 or 6 in front, half hidden, standing in the folds of her dress? No, too prominent, the child is what you see first and I don’t like just two figures in the design. How about two kids in the background peeking out from behind her, like she is protecting them? Better. I like the three figures forming a triangle. More powerful, stable, and just think of all the symbology people will read into it.

I like it, it works, especially if the first thing you see is the single woman figure and it stops you and as you look closer, you can see there are kids hiding behind her. She retains her stopping power, her character, her personality but another layer has been added to her. That of “she wolf”, the protector, the mother you do not want to mess with. 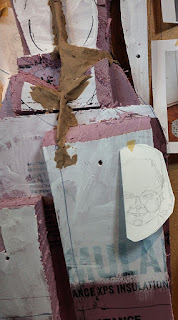 This panel if it works, is the heart and hope of the Memorial.

Now to my sketchbook to make it work. Can I pull it off?

I sent this post to a friend and fellow Compatriot and asked his thoughts.His response ... What if you had her holding a book in her right hand a a symbolic reference to Mercy Otis Warren? — and a way of showing that the Revolution was also one of ideas.  Remember what John
Adams said: “The Revolution was in the minds of the people, and it was effected, from 1760 to 1775, in the course of fifteen years before a drop of blood was drawn at Lexington.”

So, I added a book. Made sense to me. 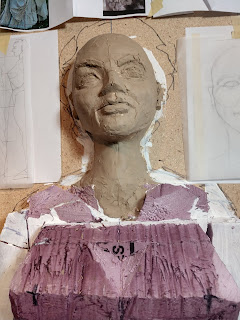 This is where it takes time.

I always build the figure first, then I add the clothes. That way they hang right. Because there is so much of the head and neck area exposed, I need to make sure that the anatomy is correct.

First the skeleton, then the muscles over that then the skin over that.  I remember back in my college days (1968-72) we had to memorize skeletal anatomy and the muscles just like the Docs, from the Gray's Anatomy Book. Then we had to draw it all and sculpt it. Four and a half years of anatomy and figure drawing.

As a "Painter", I learned enough to pass the tests. After I graduated I did not keep up. Why does a landscape painter need to remember the human anatomy? Ah the wisdom of youth. 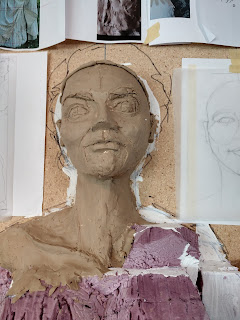 Fast forward to 2002 and now I am sculpting the human figure and casting them in bronze for art galleries to sell. Wow, talk about a fast refresher course. I pulled out my old anatomy books, Gray's, Bridgman's, and a few more I can't recall and drew and sculpted like a fiend. I also had to remember that the proportions in the books were wrong for artists. The human figure is about 7and 1/2 heads tall. Artists usually use the 8 head high proportions, four heads from top of head to the crotch, two heads to the the knees and two more heads to the floor. I won't bore you with the rest, suffice to say the names and connections and actions of the bones and muscles are the same just slightly different in size.

I work first by adding the basic muscle shapes to the face and neck area, then I work different from most artists, I detail the left side of the face and neck only, then when I get what I want I do the right side. I know, bass ackwards and it makes no sense, but that is how I work. The wisdom of age. 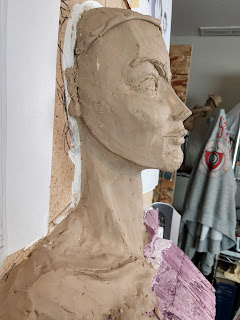 And Now the Personality ... 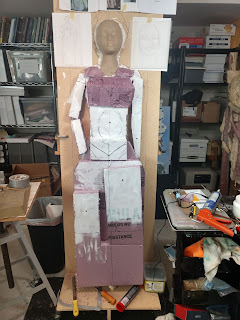 Working on the head, and the personality and character.

First I lay a very thin coat of clay to get the shape I want, then I will start to add the secondary forms of eye sockets and eyeballs, basic shape of the nose and mouth and the strong well defined jawline and cheekbones. These are the characteristics of my women sculptures. Powerful, confident but a bit of sass.

Blocked some more of the figure ... I guess she is starting to take shape.

I always begin with the Heart ... the Soul of the person. 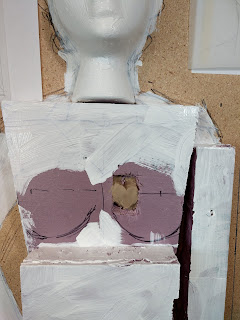 Today I started with the heart to my sculpture of the Patriot Woman. Then I added more foam to bring out the shapes of the piece.

Yes, I will cover up the heart with more foam and a lot of clay. But she will always have a heart and soul.

I learned about adding the heart to each sculpture from a Native American artist. She started with the heart and felt that each piece captured the soul of her ancestors inside and that made a contact with her people and their spirits. It made an impression with me and I also have always started with the heart and for me the soul of each piece. Then I work on the face which will set her character and attitude.

I paint the foam so that the clay sticks better. 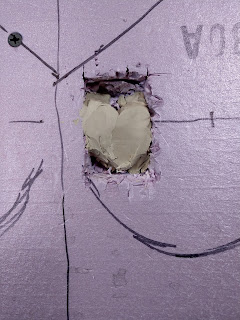 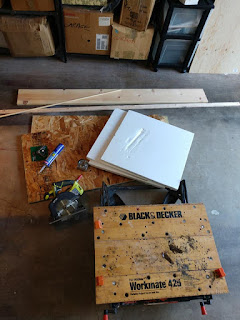 March 7, 2021
Did I tell you I have a short attention span? Remember I am working on completing my book on the National Parks and the 12 paintings that go with it?
Well, I decided last week that it was time to get started on creating the life sized clay sculpture of the Patriot Woman  for the ORWM. So today I went to my friendly Home Depot and picked up the wood and foam.

Tomorrow I will start the wood base construction and draw the figure on the wood to size. I think the lady will be 5' 2" ish and because I am limited to 18" width I will have to revise the figure a bit to fit the wall.

The paintings and the book? I will work back and forth between the two projects.

I spent over 50 years as a graphic designer and creative director at ad agencies. I had to work on multiple projects at the same time and get them all done by deadline. I guess that hasn't changed even in retirement.