I have completed all four Elements in this series; Water, Air, Earth and Fire.
On Saturday May 3, I unveiled the first of the Elements cast in bronze; Water as well as the others completed in clay.
Pre-cast prices for the individual pieces are $5500 ea. (except Water which is cast), retail will be $6000 ea. Each is a Limited Edition of 10. Life-size Bronzes of each are available Limited Edition of 2 each. Prices on request. Please email if you have questions or wish to order.

Water -Final Bronze
On the west, is the element of Water. I have tried to capture the qualities of Water: emotion, love and compassion by laying her down in a long, smooth textured, fluid pose, her hair winding under her and becoming the water gently flowing over and caressing the rocks beneath her. In the Greek and Christian beliefs she embodies the season of winter which I have depicted with her headband emblazoned with a snowflake. Water’s “tool” according to the Wicca and Christians is a cup which I have her holding and it has two dolphins which are her “animal” sign, and a water creature like her astrological sign of Pisces. Lastly, on her chest is her ancient “elemental symbol”, the triangle with the point down, or could it also be a chalice? 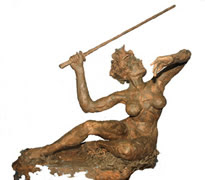 Fire - Final Clay with Patina Color
The opposite of Water on the eastern point of the compass is Fire. She is the opposite in every way. Fire is energy, passion, strength so I have her rising up as a warrior springing into action with her sword, her “tool” in the moment of attack. Her fiery personality is carried through with her spiked hair and active texture on her and the area engulfing her. Her headband carries the sun symbol, her season of summer. The elemental symbol is the triangle with the point up, the opposite of Water. Her sword handle carries the symbol of her astrological sign and “animal” Leo – the lion. 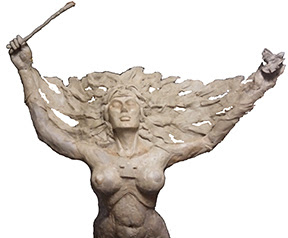 Air -Final Clay (detail) with Patina Color
Out of the north, is the element - Air. Not only the opposite in direction of Earth, but in all other qualities. She is rising up in freedom, creativity and intellect, and carrying her message and in her left upraised hand, is a bird her “animal”. She has a more youthful and open figure than Earth and on her headband is her season symbol of spring – a budding flower. The “tool” she carries is a light wand with the astrological symbol of Libra. Her elemental symbol, is the triangle with a line through it, but with the point up. 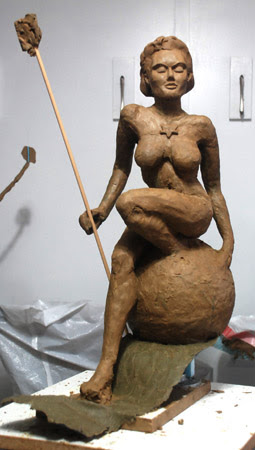 Earth - Under Construction with Patina ColorThe south holds the element of Earth. Her qualities of order, stability and maturity are emphasized in a more curvaceous maternal body, seated on a globe holding court with her “tool”, a sturdy staff, and on the head of the staff is Taurus the bull, both astrology sign and “animal” symbol. Her headband prominently displays a leaf, as she is autumn. Proudly on her chest is the elemental symbol of a triangle- point down- and a line running through it.